That abortion ceases to be a crime in our country and becomes an autonomous decision for every woman has been the purpose of many activists and feminist organizations for decades. And if we think about the practices of resistance that thousands of peasants, indigenous, black, and diverse women have sustained in this territory, even illegally, to guarantee that they and others can decide about their bodies, then we are no longer talking about decades, but centuries.

Afro-feminist activist Carolina Rodríguez[1] reviews it well when she draws attention to how forced pregnancies were a common practice during slavery, and how abortion with herbs was a resistance mechanism among enslaved women who refused to inherit this condition to their sons and daughters. In fact, with the Womb Freedom Act (Ley de Libertad de Vientres[2]) approved in 1814, the conversation about the end of slavery began. Historically, the autonomy of women has been a condition for the freedom of people and a pillar of all democracy.

A more recent milestone in this long struggle took place during the 1991 constituent assembly. By then, women's organizations were demanding that the new Constitution of Colombia include the right we have, to voluntarily interrupt a pregnancy. During this period, other significant advances were made to guarantee women's civil rights, but this one was left out of the final text. In any case, the conversation on this taboo subject became public and since then women's organizations have made it clear: women have abortions, with or without decriminalization, but the risks they run under illegality are immense and the State must guarantee the health of those who decide, at some point in their lives, not to give birth. 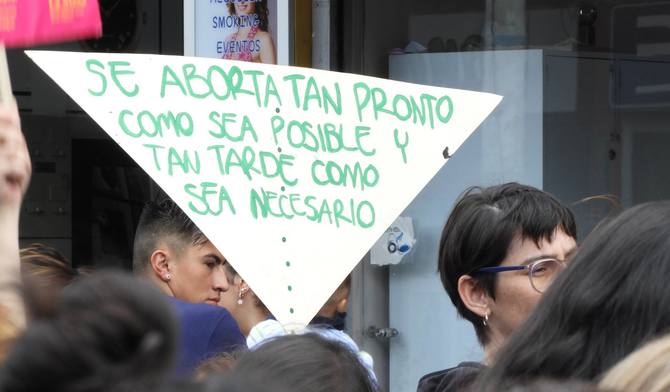 Fifteen years passed until the ruling of the Constitutional Court in 2006 that decriminalized abortion in three circumstances, namely, when the pregnancy was the result of rape; when there was a malformation of the fetus, and/or when the pregnancy presented a risk to the woman's life or health. During the almost two decades that passed between the Constitution of 1991 (still in force) and Judgment C-355 of 2006, the exercise carried out by activists, organizations, and institutions both in street demonstrations, in the documentation of cases of clandestine abortions and its implications, in the academic production and the review of international experiences, and by strengthening its litigation strategies, had no pause. It was thanks to this work that the Court was able to rule on legal arguments, on such a controversial issue for a country with conservative traditions and in which, although it professes to be secular, the church continues to influence state decisions.

Now, although decriminalization under the three circumstances was an important achievement, the figures and testimonies continued to show that it was not a sufficient step. The barriers to access legal Voluntary Interruptions of Pregnancy continued to be very broad and deepened even more for women and pregnant people in situations of vulnerability. The magazine Cerosetenta cites the following: “according to the Guttmacher Institute, every year in Colombia some 400,400 abortions are induced, of which only between one and nine percent are performed in health institutions, under one of the three decriminalized circumstances. The rest are illegal abortions, of which about 32% result in preventable complications under safe conditions. Every year in Colombia, some 132,000 women suffer complications from unsafe abortions, and around 70 die”[3].

It is in this context that Causa Justa was born, a convergence of women's organizations, experts, and activists who decided, in 2002, to file a new lawsuit before the Constitutional Court to definitively remove the crime of abortion from the Colombian penal code and eradicate profound risks stemming from barriers to access.

On February 21, 2022, the Constitutional Court ruled again. After reviewing each of the arguments presented in the Causa Justa lawsuit, the decision was made to decriminalize abortion up to the 24th week of gestation. After this term, a voluntary interruption of pregnancy may only be carried out under the three circumstances established previously.

The judgment C-055 of 2021, was received with great happiness and celebration by feminist activists who had been meeting for months in front of the Court's facilities awaiting the decision. It was no longer a small group as it happened in 1991, and even in 2006, this sentence was greeted by a lot of women, trans people, and non- binaries, especially young people, who, as happened days later in the commemoration of March 8, occupy the social media and streets, clearly and explicitly assuming a militancy for their rights, including that of autonomy over their bodies.

This ruling of the Court represents a very important advance for several reasons: it defends the need to guarantee a dignified and free of violence life for women; recognizes that in Colombia health rights for women have been violated due to the access barriers to voluntarily interruption of pregnancies; points out that this violation has affected specific populations to a greater degree, for example, irregular migrant women; and makes it clear that the State must guarantee this right without conditioning compliance with the ruling on the progress made by Congress to issue a comprehensive Public Policy on sexual and reproductive health.

Of course, this favourable reading is not shared by all citizens. The reactions against the ruling were immediate and were characterized by a strong misrepresentation of the implications of the ruling. The aspect on which the detractors focused was the term determined by the court in the ruling: total decriminalization for interruptions that take place before 24 weeks, that is, five and a half months of gestation.

The lawyers of Causa Justa and many other organizations and journalists have had to devote their efforts to explaining the ruling and denying fallacious arguments such as those put forward by rulers, influencers, and congressmen who have come to affirm such absurd things as what is behind the pronouncement is a business of commercialization of fetuses, or that the sentence is encouraging infanticide.

As the report points out, the term of 24 weeks, although controversial, is necessary for a country like ours. The expectation of Causa Justa with the lawsuit was total decriminalization since it is not convenient to maintain a margin of criminalization of abortion and to impose limits on the autonomy of women and pregnant people.

Let us clarify, “according to organizations such as Causa Justa and Doctors Without Borders, between 70% and 80% of abortions in Colombia are performed in the first trimester of pregnancy. Only 2% are made beyond week 20”. It is not true, as has been claimed, that women keep waiting to interrupt their pregnancy, for no reason. They do it as soon as they can. And those who access this service at older gestational ages are precisely those who are in a greater situation of vulnerability and who have faced more barriers.

The decision to decriminalize abortion up to the 24th week would be oriented "to guarantee that even women in the most extreme situations - who are not the majority, but the most vulnerable - can interrupt their pregnancy the safe way". According to La Mesa por la Vida y la Salud de las Mujeres, between 10% and 15% of abortions in the country are performed during the second trimester, and in most cases, they are girls who are victims of rape or women who live in the rurality.

“Women who seek abortion at that gestational age share several characteristics. They are the youngest, girls who sometimes have not even menstruated, and only until they notice their belly is pregnancy suspected. Also, those who face moments of crisis, such as the loss of their support network or their partner. They are the ones who find out about fetal anomalies. Or those who receive diagnoses of chronic or terminal illnesses that could lead to the orphanhood of the child, or poor quality of life. And in most cases, they are the poorest, the least educated, and those who live in rural areas. A group for whom the barriers of the health system are more crushing”[4].

From FOKUS we celebrate the Court's ruling because our commitment to women's rights is unwavering. This has been the reason why we have supported the Causa Justa movement and accompanied its process before the Constitutional Court. We understand that the autonomy and well-being of women cannot be conditioned by the instrumental uses politicians make of our lives, especially in electoral contexts. We are not talking about figures; we are talking about life stories, and we will continue to support women’s right to decide.

The decriminalization of abortion must be a reality throughout the region, and we will continue to support organizations and activists in their commitment to documentation and pedagogy so that society understands that decriminalizing abortion does not force anyone to interrupt a pregnancy.